For those of you who still check back here on blogspot, I thought it time for an update on the site!

We're currently upgrading the website, so I apologise things have been a little slow lately. Work is in progress, and we are looking to launch the new site in July. We want to optimise it as a resource for the community, and we want to do it right, hence why it is taking a bit of time.

Things have been a little slow, but with work now well on the way I will be picking up the content and gig guide again, and stay tuned for some interviews for NZ Music Month!

Thanks for checking back, and stick with us - it's a process, but it'll be worth it!
Charlette Hannah (editor)
Posted by Charlette at 10:33 am No comments:

Wellington Live Music website is undergoing maintenance and will be back and better than ever in February.

Thank you for your support in 2007, keep checking back for updates.

Happy new year from the team at Wellington Live Music!
Posted by Charlette at 6:28 pm 2 comments: 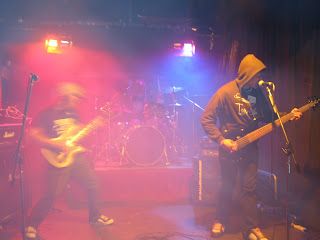 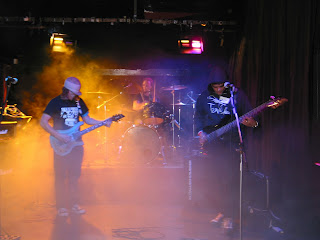 Worn Villain totally rocked my socks off on Thursday night at Valve. From the very first song they had me hooked, with their pounding drums, and melodic, dynamic guitaring. On the second song the bass player put his bass down and took the mic. I was impressed that the band managed to keep the full tight sound even without the bass underneath. I got a bit frustrated with that song though - the primal screaming doesn't really do it for me, and I wish metal bands could be loud and sing powerfully without the screaming. Having said that, they do the screaming thing very well.

The music was unpredictable and very dynamic. The drums were forceful and solid, and the bassist and guitarist switched between instruments and vocals with equal fluency. According to a friend who is more familiar with this style of music than me, they sound like a mix between Shellac and early Metallica in their instrumentation.

I feel I have to make a note about Blair, the Valve sound engineer - again, proving himself to be one of the best around. Not only does he mix a wicked sound, at one point the bass player's strap came off, and as he knelt down to continue playing, Blair got up on stage and fixed it for him so he could stand up and resume the dual vocals. Credit to Worn Villain is due of course, for not pausing for even a second and letting up on their assault - the drummer threw away a stick, the bass player lost his strap, and you wouldn't have even noticed aurally.

All in all, the music was original and powerful. I loved it, and it's not even my usual kind of thing. Worn Villain appear to be a mostly instrumental band, which is unusual, but suited me fine, as I turned off a bit during the growling vocals. The last song was my favourite, it was powerful and absolutely beautiful in a slightly disconcerting way.

If you like quality heavy rock/metal, I would definitely recommend checking these guys out. I think if they brought in some more melodic vocals (ie. Tool, System of a Down) they could have a much broader appeal.

Will the waves of beautiful music ever 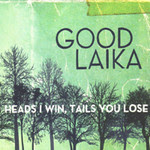 calm in ? Listening to Good Laika’s debut album the answer has to be not likely. Heads I Win, Tails You Lose is a melancholy masterpiece. The warmth and honesty of these tracks are delivered like an old friend taking their seat next to you in your local, cozy drinking hole on a blustery Saturday afternoon. Their soulful, folky and heartfelt sound is fluid throughout the album. Fires, Keep Burning has a thoroughly laid back and mellow vibe, strumming along with a beautiful softness. The pace changes with Advertisement For A Pacemaker, the build up is deliberately moderated, not going too far, but fast enough for a good dance. Short, and remarkably sweet, Pretty Little Girl Of Mine mischievously rock and rolls along, vocals really ranging here with a sunny vibe, playing along together with the cheeky bass. The twinkle in this five-piece band’s eye took five years to capture, but why rush such a timeless and compelling sound.

Posted by Charlette at 2:53 pm No comments: 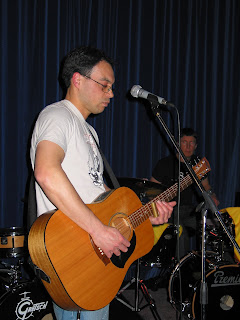 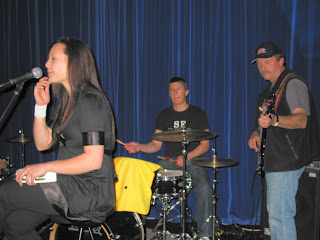 Guitarist/singer Martin started the show with his back to the audience - a brave move. Picking the guitar strings, he then launched into a rich and interesting full band song. With Martin providing ample guitar instrumentation, and backing from a varied and competent rhythm section, Pisces were a great listen right from the start.

I have to admit that I couldn't find anything on the web about the band, so I don't know their full names, or the spellings of them. If anyone would like to help out with that information, it'd be much appreciated!

Backing singer Carly had a beautiful soulful voice, with a lovely trill and easy feeling to it. The tambourine got a little boring, but it did add another dimension to the percussion. She took the lead on a fantastic acoustic rock 'n roll number - Jimmy Jones I think it was called. It was great to hear the harmonies between her and Martin. She smiled the whole way through, nice to see someone really enjoying being on stage.

The upbeat pop/rock had slight country tones, and the performance was dynamic. The songs were instantly catchy, and with the laid back drumming, powerful guitar and great bass tones, Pisces were an entertaining and pleasant listen for a Wednesday evening.
Posted by Charlette at 12:54 pm No comments: 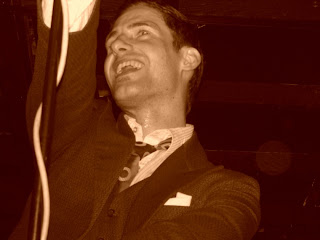 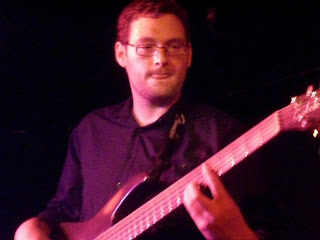 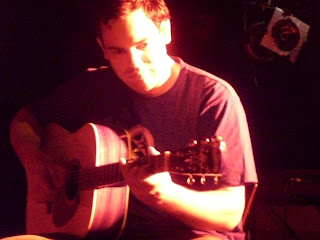 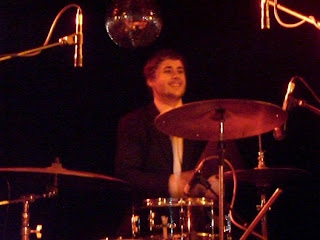 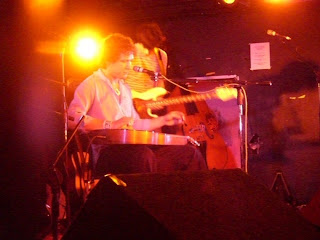 Expectations were high on Friday night - after a long wait, OdESSA's much anticipated second album was ready for release and they wanted to celebrate it in style. A good portion of Wellington decided to join them.

OdESSA has become a local legend with their feverish, high-octane performances coupled with fantastic tunes and beats that you can't help but dance to. Their album 'The Prize' finally manages to capture the energy and polish of their live show in a studio album.

With so much expectation for the headliners, the Thomas Oliver Band took to the stage with no fanfare- not that stage fright is a problem for a young man who opened for Eric Clapton at the Mission Estate concert earlier this year!

It only took a minute for the crowd to get right into their performance, and each song ramped up the excitement from there. A three piece comprising Thomas (guitar and vocal), Steven (electric and upright bass) and Tom (drums), they made effortless changes through folk, pop, rock, soul, slow blues and country. Closing with the show-stopper 'All I Can Say', Thomas led the band through a medley of 'Cocaine' by JJ Cale and 'Ground On Down' by Ben Harper before snapping back to their own song to close the set. They left the stage to rapturous - and justified - applause, with many new fans.

OdESSA has played hundreds of shows in the last 5 years (I've been to almost all of them!) but obviously wanted to make this one special. Usually playing as a four-piece, they were joined this evening by a female vocalist, percussionist and keyboard player.

Concentrating on numbers from the new album, each band member excelled. Laying a ferocious beat that belies the scaled-down drumkit, Matthew 'Puba' Swain gave unstoppable groove to each number. Paul Mouncey on bass laid down fantastic lines that complemented everyone else's performance, and blew the crowd away with a bass solo that most guitarists wouldn't have a hope of replicating. Dan Ryland, the new guitarist, threw off melodic lead breaks and gentle acoustic numbers with equal ease.

Above all, Matt Pender, the ultimate frontman, blessed with athletic dancing, a fantastic voice and unbreakable stage presence. His dancing turned the crowd into a wild, sweaty yet good-natured mosh pit. The crowd danced, jumped, clapped, sang and yelled for more.

This was undoubtedly one of the most enjoyable gigs I've been to, and it's a wonderful thing that two bands should have the courage to play a wide variety of styles and be so warmly received by everyone present. Out of five stars, this gig gets a Milky Way.
Posted by Charlette at 6:11 pm No comments: 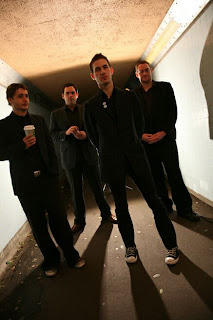 Sensational, captivating and hugely entertaining were amongst the words that sprung to mind as left the stage at The San Francisco Bathouse last Friday night. Promoting their second album, The Prize, this band really knows how to put on a bloody good show. Pender is a star, totally at home on the stage. A talent that it can be argued, you are only born with. He’s definitely up there with the best of them, and with a sound that both elates and physically moves you; it looks like ’s prize is a winner. The crowd were certainly hungry to hear their fresh sound.

The tracks from the new album were welcomed enthusiastically, matching the crowds dancing. It was busy, but not too busy to prevent you from expressing your desire to dance to such new delights as Bleeder, an obvious future anthem. Vastly fused music, hitting on such diversity as the blues, rock and funky-pop, it’s extremely inspiring to hear and watch. Expressing their personalities; two donning suits, one in a T and one in a shirt, their infectious energy bursts off the stage onto the dance floor. The glitter balls should have been spinning as the crowd got deeply immersed in the groove.

Pulling the old and faithful out of the bag, Promises Promises, proved that Ryland, the latest member, has totally found his feet within the band, his guitar work smooth and confident. Is That You Calling, heard the drumbeat revving up the pace, getting the crowd jumping around. The lyrics always unveil a depth within the band’s heart. The formula is positively sealed; take a charismatic, animated front man, add 3 fellow talented musicians and finish off with beautifully written and produced tracks. As Pender says, they are a “classic band” and for sure this was a classically, dazzling performance.

Posted by Charlette at 4:37 pm No comments:

Labels: bleeder, is that you calling, OdESSA, promises promises, san francisco bathhouse, the prize
Older Posts Home
Subscribe to: Posts (Atom)
Wellington Live Music features local and touring artists, from buskers to professional bands via open mic nights and festivals.
We are launching the all-new official Wellington Live Music at the beginning of October. Join our celebration at the San Francisco Bathhouse on the 12th of October!

You are welcome to use the photo's or reviews on this site, but please provide a credit back to the photographer or writer, and a link back here!

Join us on myspace here.

As we are a new and growing site, we do have vacancies at the moment for a range of roles.

WRITERS
If you are a writer and would like to be featured on Wellington Live Music, please email us here with any relevant experience, and why you would like to write for us.

PHOTOGRAPHERS
Keen on rock 'n roll photography? Send us through a sample of your work.

WEB DEVELOPERS
We are starting work on rebuilding Wellington Live Music soon! Applications closed. We have found a web developer and it's all go.